Stoning of <insert your name here> 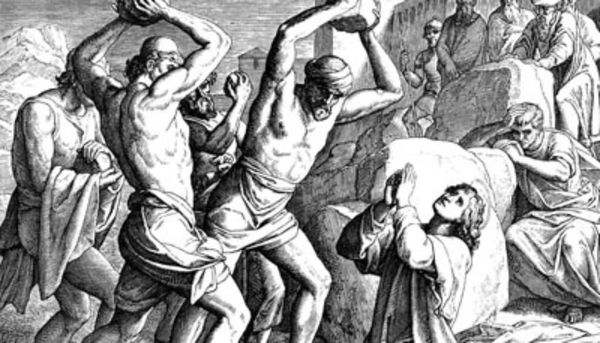 Most people don’t realize that Stephen was chosen by the disciples to “just” feed the widows. Acts 6:1-6

The disciples were so busy witnessing, healing, and growing the numbers of believers - they didn’t have the time to handle complaints of widows not getting their daily meal distribution.

Yep. Stephen and 6 others were chosen to be the ancient version of “meals on wheels” and do something the disciples wisely ADMITTED they didn’t have the time for.

But. Stephen didn’t “just” feed the widows. He operated in great power!

“And Stephen, full of grace and power, was doing great wonders and signs among the people.”
Acts 6:8

In fact, he was so filled with wisdom, power, boldness, truth, zeal, and words from the Holy Spirit ... it got him killed. Yes. Stephen lived and died like the One he admired:

And falling to his knees he (Stephen) cried out with a loud voice, “Lord, do not hold this sin against them.” And when he had said this, he fell asleep. Acts 7:60

This man’s ministerial assignment was to “just” feed the widows ... yet he was martyred. And His own death sent the MULTITUDES of believers fleeing out of Jerusalem and into the rest of the world.

Yes. Stephen’s courage and death served to spread the gospel across the ancient world!

Folks. Be like Jesus no matter where you are assigned, take whatever flack you get, and turn the results over to God.

It doesn’t matter how small you “think” your role is. God will take it, use it, and multiply it .... if you let Him.